Boone Isaacs will assume the directorship of the three-campus film school starting on Jan. 1, 2022. She will lead from the ASU California Center as well as from Tempe and from Mesa, which will be home to a 118,000-square-foot, state-of-the-art film and immersive media center.

Peter Murrieta, who has served as director-in-residence, will continue in a leadership role supporting engagement and outreach efforts. 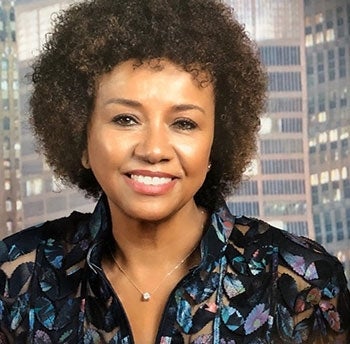 With her decades on the front lines of the film industry, Boone Isaacs brings well-earned practical advice and leadership to ASU and The Sidney Poitier New American Film School. She has worked on more than 300 movies and served four terms as president of the Academy of Motion Pictures Arts and Sciences. During her 24 years as a board member, she served as president of the Academy Foundation and produced the academy’s 2012 Governors Awards.

In January 2016, one year after the #OscarsSoWhite movement, all 20 Oscar nominations in the acting categories went to white performers — again. Boone Isaacs called an emergency meeting of the academy’s board of governors. At that meeting, the group approved sweeping and ambitious changes with the A2020 initiative, including the goal of doubling the number of women and ethnically underrepresented members in four years.

The academy had already been working toward increasing diversity and inclusion, Boone Isaacs told The New York Times in a 2020 oral history of #OscarsSoWhite, “but we went from first to fourth gear.”

“The academy is going to lead and not wait for the industry to catch up,” Boone Isaacs said at the time. Spike Lee told the New York Times, “Cheryl Boone Isaacs really made it her mission to open things up so that the voting body looked more like America.”

Boone Isaacs said she is drawn to ASU because of its emphasis on “representation, and the idea of inclusion, not exclusion.”

“Sidney Poitier — the man, the icon, the legend — is my North Star who exemplifies determination, passion, professionalism and excellence,” Boone Isaacs said. “I am honored to be part of his legacy and to impart his ethos to future generations of storytellers.”

Steven J. Tepper, dean and director of the Herberger Institute for Design and the Arts, said, “Cheryl Boone Isaacs has built her extraordinary career championing — and exemplifying — two of the primary things The Sidney Poitier New American Film School stands for: inclusion and excellence. Cheryl is one of the most respected leaders in Hollywood, and she fully understands its operating system — making her the perfect person to build a school that can help disrupt both film education and the industries it serves.”

Boone Isaacs is looking forward to building the newly established film school with an eye to the future, with the goal of empowering visual storytellers across entertainment platforms.

“The world of storytelling, and certainly visual storytelling, is really taking off,” she told an audience in the 2018 IPR Distinguished Lecture. “I'm not sure any of us really understand how much it's going to impact ... so many different platforms by which these expressions can be seen and shared with others.”

Boone Isaacs got excited about working in film when she was very young, thanks to her older brother, Ashley, who worked in the industry. Boone Isaacs and her family would drive from their home in Springfield, Massachusetts, to New York City for the big movie openings, including 1961’s “West Side Story.”

“He was the coolest guy ever,” Boone Isaacs said of Ashley, who began his career as a junior film publicist, promoting movies to audiences overseas. One of those movies was 1963’s “Lilies of the Field,” which starred Poitier in an Oscar-winning performance.

Ashley Boone would go on to work for Poitier’s production company, before landing at 20th Century Fox in 1972, where he became the president of distribution and marketing. Along the way, among his many achievements, he played a critical role in the launch and success of “Star Wars” and oversaw the midnight showings that turned “Rocky Horror Picture Show” into a cult hit.

It was through her brother that Boone Isaacs first met Poitier, in the late '60s.

“He was such a striking figure,” she recalled. “And he was very kind and sincere.”

Their paths would cross again through Boone Isaacs’ work with the academy. She served as president of the organization from 2013–17, the first Black person, first person of color and third woman elected to the post.

Boone Isaacs’ path to the film industry was not direct. After graduating from Whittier College with a degree in political science, she became a flight attendant for Pan American World Airways. She’d fallen in love with traveling her junior year abroad, in Copenhagen, Denmark: “I discovered I had such an interest in how other people existed on the planet, whether it was through art, architecture, language — all of it, how different it was.”

When she was 25, she moved to Los Angeles to find a job in the film industry. Ashley was not “for it,” Boone Isaacs said.

“He knew how tough it was in the industry as a Black man and how tough it would be for me as a Black woman, when there were only a few women and few people of color behind the scenes at the time,” she said.

In the end, her brother did help her, indirectly: “He helped me because he had a great reputation. Barry Lorie at Columbia Pictures asked me if I was related to Ashley, and I said, ‘Yes, he’s my brother,’ and he said, ‘OK, you’re hired.’”

At Columbia, she served on the publicity team for Steven Spielberg’s “Close Encounters of the Third Kind.” The following year, she was hired as coordinator of marketing and publicity at Melvin Simon Productions, where she worked for five years and rose to become vice president of worldwide advertising and publicity.

In 1983, Boone Isaacs was named director of advertising and publicity for the Ladd Company, where she worked on films such as “Once Upon a Time in America,” “The Right Stuff” and the box-office hit “Police Academy.” In 1984, she was named director of West Coast publicity and promotion for Paramount Pictures. She went on to lead the worldwide publicity department as executive vice president for Paramount and orchestrated the marketing campaigns for Academy Award Best Picture winners “Forrest Gump” and “Braveheart.”

“When I first started (in the film industry), I said to myself, You’re going to put your head down for 10 years and work hard, and in 10 years you’re going to look up to see if you’ve advanced. It’s a fast business — a lot of egos, a lot of money. You earn respect, you earn advancement. I spent 13 years at Paramount moving up, moving up. I got passed over a few times. I don’t forget, but I don’t hold a grudge. I just thought, ‘Keep plugging.’”

In 1997, Boone Isaacs was named president of theatrical marketing for New Line Cinema. She was the first African American woman to head a studio marketing department, and only the second African American to do so: The first was her brother, Ashley, 20 years before her.

At New Line, Boone Isaacs developed and executed the campaigns for such films as “Austin Powers: The Spy Who Shagged Me,” the company’s highest-grossing film at that time; “The Wedding Singer”; “Rush Hour”; and such critically acclaimed motion pictures as “Wag the Dog,” “Boogie Nights” and “American History X.”

In 2000, she founded her own company, CBI Enterprises Inc., and worked on publicity for “The King's Speech” and “The Artist.” She has also consulted on marketing efforts for such films as “The Call,” “Precious: Based on the Novel ‘Push’ by Sapphire,” “Spider-Man 2” and “Tupac: Resurrection.”

In 2014, Boone Isaacs was inducted into the NAACP Hall of Fame. She has served as a trustee of the American Film Institute and holds honorary doctorate degrees from the University of North Carolina School of the Arts and the Chapman University Dodge College of Film and Media Arts.

In particular, Boone Isaacs aims to help students gain an understanding of the size of the industry and the many levels within it.

“What students usually know is actor, director, writer,” Boone Isaacs said. “It’s important to understand the industry and how many career possibilities there are inside of it — and then the support group that surrounds it. Depending on your attitude, your aptitude, your desire, the range is wide.”